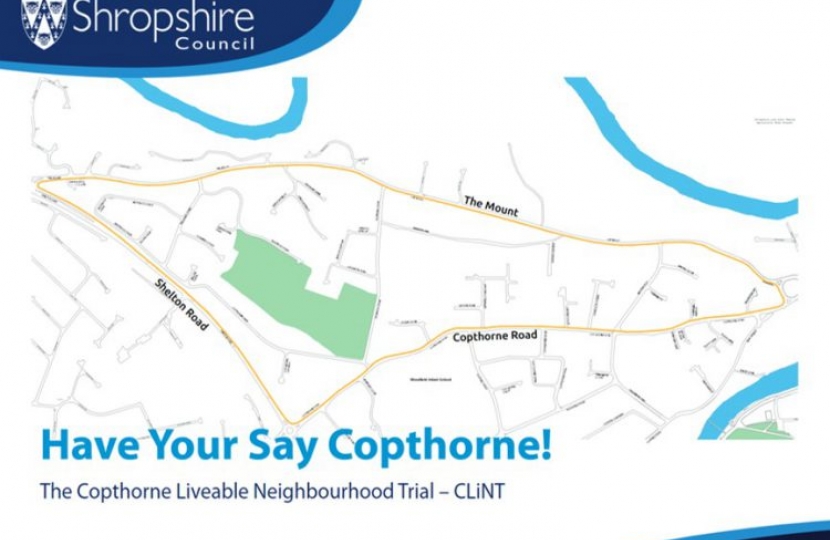 Residents in the Porthill and Copthorne areas of Shrewsbury are being asked whether Shropshire Council should implement plans for ‘Liveable Neighbourhoods’ in the two areas for a trial period of up to 18 months.

A Liveable Neighbourhood aims to make neighbourhood streets safer and more appealing for residents, cyclists and pedestrians by removing rat-running traffic.  Now, in a public engagement exercise that runs from Monday 4 October until 1 November 2021 people will have the chance to say what they think about the proposals.

To find out more about the Porthill Liveable Neighbourhood Trial, and comment on the proposals, click here.

To find out more about the Copthorne Liveable Neighbourhood Trial, and comment on the proposals, click here.

In recent years, residents in both areas have raised concerns relating to the high volumes of rat-running traffic cutting through neighbourhood streets to gain access to and from the town centre.

These concerns have highlighted the impact high traffic volumes and speeds have had on the ‘liveability’ of the area as well as the ability of people to walk and cycle safely.

A Liveable Neighbourhood would put measures such as ‘modal filters’ in the form of bollards or wooden planters at one end of a road to close it to through traffic.

A 20mph speed limit across the area is proposed for both liveable neighbourhoods as well as traffic calming and additional crossing points on Copthorne Road, as well as ‘bus only’ through-access on Woodfield Rod.

‘Pocket parks’ or ‘parklets’ – temporary seating areas placed on street corners or in parking spaces, – are also a common feature of liveable neighbourhoods. They aim to slow traffic as well as provide additional greenery and a place for people to sit outdoors and socialise.

I was disappointed to receive this reply to my Written Parliamentary Question. These delays are no longer acceptable.