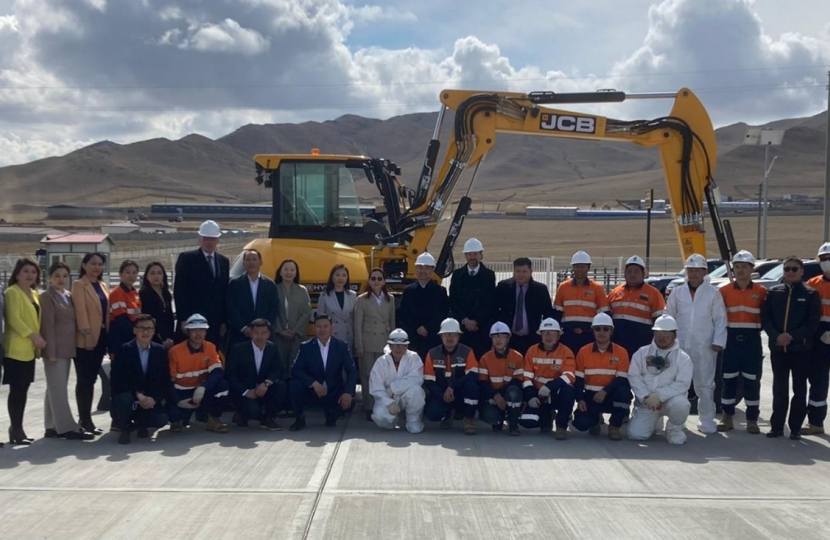 As the PMs trade envoy to Mongolia, I have just completed a four-day visit to this country.  We had the opportunity of visiting the single largest foreign investment in the country which is the British/Australian copper mining investment run by Rio Tinto.  This is the third largest copper mine in the world.  We were taken 1.3k underground to inspect the vast honeycomb network of tunnels where excavation is taking place to mine copper and gold.  This is an investment of over $12b and a hugely strategic important investment.

Mongolia a country sandwiched between Russia and China inevitably finds herself in a precarious situation dependent on energy and trade from Moscow and Beijing.  They view the UK as an extremely important third-party neighbour and want to engage with us as much as possible to make them less dependent on the two giants that straddle their borders.

One of the companies I met was a local Mongolian dealer selling JCB machinery.  I had the huge privilege of meeting the owners and their team and asked them how do they compete with cheaper Chinese products.  They replied unequivocally it is the strong British brand, the quality of British manufacturing and the strength of the service of products that has allowed them over a very short period to capture a significant portion of the market and they are expanding rapidly.

As we have left the EU and are this year going to join the new Indo-Pacific CPTPP Trade agreement, recalibrating British global exports to the Far East countries like Mongolia will become increasingly important.   British companies should be encouraged to look to far Eastern markets like Mongolia, who will be critical for our prosperity agenda

During my visit I had the honour of meeting many British companies who had joined me on this trade delegation to promote high quality British manufacturing goods and services.  In addition to the mining sector, they included agriculture, medicine, health care and in financial services.  We must help Mongolia to be less dependent and less vulnerable to overdependency from Russia and China and I am truly humbled by the response we received from our Mongolian friends and partners.

In my role as Trade Envoy to Mongolia, I was pleased to host a group of officials from Mongolia to discuss trade relations.  Our discussions were followed by a tour of Westminster to inform them of the history of UK decision making.