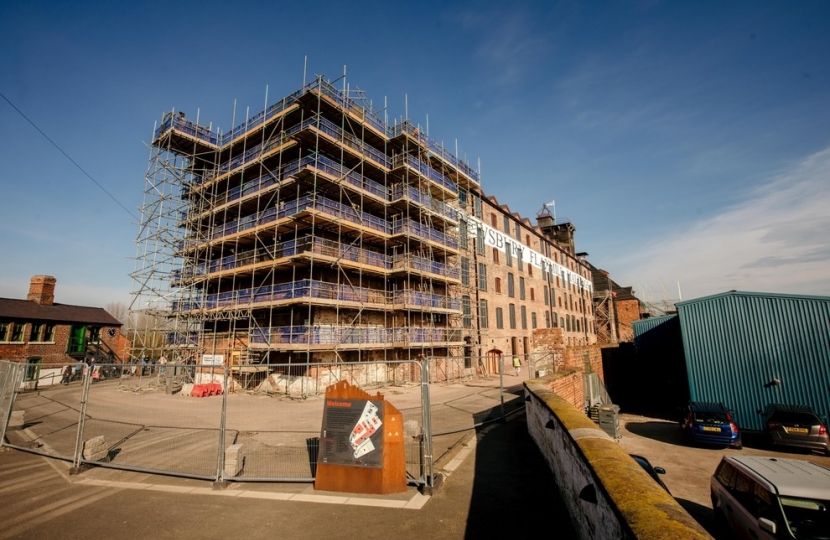 The Flaxmill Maltings in Shrewsbury was at the heart of the industrial revolution and, for almost two centuries, employed hundreds of people at a time before it fell empty 30 years ago.

Now new life it being breathed into the once derelict building thanks to the determination of a group of people who never gave up hope that it could be saved.

At a special open day at the building in Ditherington almost a thousand people joined tours of the buildings that are under restoration, to see the completion of the first phase of a £25 million scheme. It was organised by The Friends of the Flaxmill Maltings in conjuction with Historic England and specialist contractors, Crofts.

The amount of people who wanted a peep inside the buildings took them by surprise.

Richard Benjamin, from the Friends group said: "We weren't starting the tours until mid morning but we had people queuing up at 9.30am. By lunchtime 300 people had joined one of the two types of tour."

Donning hard hats and hi-vis jackets, small groups of 20 were taken around floors that are mid-way through restoration, with some climbing high up to the Jubilee Tower.

Contractors explained about the highly skilled work needed to restore a grade one listed building and some of the costs involved for instance each brick made for the restoration has cost £3 and some of the 27,000 Penrhyn slates £70.

Juliet Baillie from Historic England explained: "The Flaxmill was built during the time of the brick tax, when every brick made was subject to a tax. So to keep costs down they used larger bricks."

One of the major costs has been the new windows in the building.

When the building was a flaxmill, she said it needed to be light so that the workers who make the most of the natural light and work long hours so there were lots of large windows.

But when it was converted to a Maltings the opposite was the case and the business had to have darkness at times for the germination process.

"The windows were made much smaller and had shutters to allow the right among of light at the right time. We have put back the two out of three of each window to the size they would have been in the Flaxmill."

She said she was thrilled to be working on such an incredible project.

"When the restoration is complete there will be a visitor centre and a cafe on the first floor and office accommodation, commercially let, on the higher floors.

"The Jubilee Tower is also be open to visitors with viewing panels installed so they can enjoy the incredible views."

One visitor who already knew how wonderful the views were was Sue Whittingham from Wem, who worked in the laboratory in the Maltings for nine years before it closed in 1987.

"It is wonderful to see new life being breathed into it," she said.

"I remember one day being allowed to go into the Jubilee Tower and going onto the roof to take in all the views.

"Those who worked on the maltings floor had a very hard manual job, moving the malt around constantly."

Susanna Henley's grandfather, Frank Mansell, was involved in maintenance in the maltings. She travelled from Stockport to see the restoration with her daughter, Keira, 17, who wants to be a construction worker and said it was fascinating.

The Friends of the Flaxmill Maltings have seen the building evolve during the restoration process.

One of them, Jean Rusden, moved to Shrewsbury in 2007 and remembers first seeing the building on the bus.

"I was blown away. I have always been interested in architecture and I knew that I had to find out more about it," she said.

She is now a volunteer and says: "Looking at what has been done is brilliant. This building has got to live again."

The original article can be found at - https://www.shropshirestar.com/entertainment/attractions/2019/02/25/visitors-see-new-life-is-breathed-into-shrewsburys-flaxmill-maltings-with-pictures/

Without additional government investment the River Severn Partnership cannot implement schemes to prevent the devastation caused by the flooding of the River Severn.  I have asked the Chancellor of the Exchequer if he can consider awarding the Partnership further funding in order that they can pr