New Developments in Bid for Electrification of Shrewsbury Rail Line 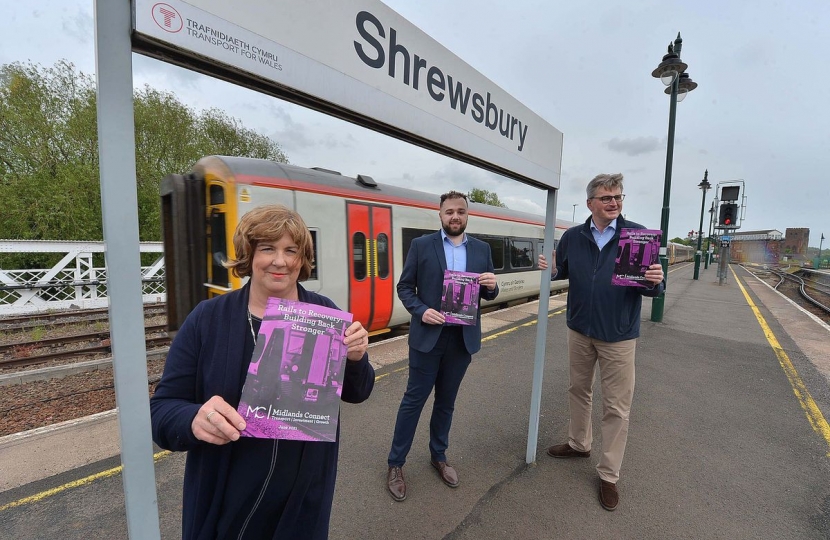 Midlands Connect, the body tasked with developing transport projects in our region, has just announced a transport plan that proposes to save passengers time and money, and will boost the economy and help the environment.  The new study, 'Rails to Recovery: Building Back Stronger', proposes rail electrification, faster local trains and a new hourly train to London from Shrewsbury.  I have had extensive discussions with officials from the Department for Transport earlier this year and am pleased that better links for Shrewsbury feature in the proposals.

At the moment, if you take the direct to train to London, it has to change engines at Birmingham because the line is not electrified. I am convinced that this has to change. My constituents frequently raise with me the pressing issue of climate change, and I think that an electrified line would help play a part in tackling this issue. Businesses, commuters and residents in Shrewsbury deserve a first-class rail service and I will work to deliver the rail infrastructure that Shropshire deserves.

Electrification, along with track upgrades, would see journey times between Shrewsbury and Birmingham cut from 56 minutes to 45 minutes.  The report also presses the case for a new hourly service to run from Shropshire through the Black Country and Birmingham to London, increasing capacity on the often over-crowded route. And it says journey times could be slashed by using faster trains travelling at speeds of up to 90mph – up to 80 per cent faster than they do now.

The Emergency Department (ED) at the Royal Shrewsbury Hospital (RSH) is undergoing a £9.3million transformation as part of a programme of work to improve patient care.